Written by: Young Professionals of Wichita on Friday, April 18, 2014

As the owner of Cassandra Bryan Design since 2009, Cassandra Bryan is already compiling a list of community accolades. She won the Innovations in Business Award from Young Professionals of Wichita in 2013 and is currently one of five finalists for the Wichita Metro Chamber of Commerce’s Small Business Awards.

“To us, the biggest award is that we have a lot of repeat business and a lot of great clients to work with,” Cassandra said. “Everything is a bonus when you didn’t really mean to do any of it.”

What does she mean by that? Well, Cassandra Bryan Design (or cb{d} to her clients), was formed more out of a need than a purposeful effort to create a full-fledged website design company. She originally started working out of her basement at home. She then added Levi Mabe, now her Director of Development. 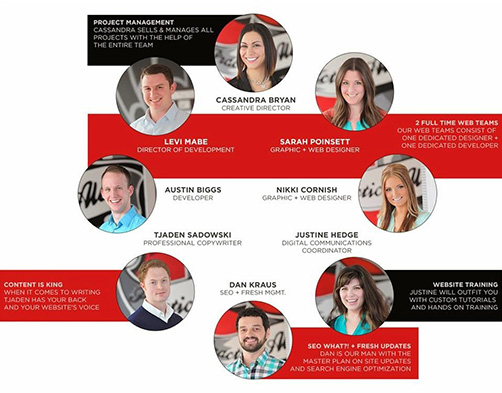 When they started to get enough projects to hire designers on the team, not just as freelancers, it was time to set up shop officially. Other staff members include Sarah Poinsett, Nikki Cornish, Dan Kraus, Austin Biggs and Justine Hedge.

In 2012, the team moved into office space in downtown Wichita. As she put it, “Now we have roots in the community. At this point, there’s no turning back.”

With six employees working for cb{d}, Cassandra is responsible for making sure she has work in the pipeline for the next few months. But one of the most exciting things about continuing to grow is being able to do things like add an IRA as part of the employee benefit package.

“The scariest piece about starting a business was hiring people,” Cassandra said. “Being responsible for making sure you really have enough work to do to support someone else’s family. I started this just two years after I’d been interviewed for my first job.”

As a young entrepreneur, Cassandra recognizes that it is important to help mentor other emerging entrepreneurs. A graduate of Friends University, she and members of her team often go back to talk to current students about her successes. But mentorship goes the other way, too.

“Every chance I had, I asked as many questions as possible,” Cassandra said. “You might get shot down sometimes, but the ones who will help are going to be great assets.”

Her advice to anyone thinking about going out on their own was this: “If you want to do it, before you make the leap, ensure there’s a need for your product or service. It should come naturally.”

This profile is part of a series on entrepreneurial YPW members in honor of Entrepreneurship Month here on the YPW blog. If we’ve inspired you to start your own venture, you can also check out the www.ictunconference.com on April 22 to create your own collisions and start something great.

Tell us about your project.